In 2001, after 17 years of being a stay-at-home mum, Carol Goldsbrough decided it was time she did something for herself.  Her youngest child had started secondary school and Carol, from the Owton Manor area of Hartlepool, wanted to get out of the house and keep herself busy during the day.

"I'd heard about a volunteer service run by the Owton Fens Community Association [OFCA] on Catcote Road and thought I would pay a visit to find out what vacancies they had," says Carol.  "The staff there were very welcoming, friendly and professional.  We talked about my past, the things I wanted to achieve, and what I could do to achieve those things."

Carol liked the comfortable atmosphere at OFCA and decided to give volunteering a go.  She started off with a cleaning vacancy and hasn't looked back since.

"It wasn't until I started volunteering at OFCA that I realised how many projects it offered the community and its residents, young and old.  I was excited at the thought of all the things I could get involved with!"

As a volunteer, Carol was assigned an Information and Guidance (IAG) worker, to help her find ways to build her skills.

"I was fascinated by computers," Carol remembers.  "After talking about it with my IAG worker I was given the chance to use the computer at OFCA.  I liked it and wanted to learn more, so I enrolled on the Association's basic computer skills course."

Carol passed the course with flying colours and went on to study for the more advanced IBT2, CLAIT and CLAIT Plus.  "I passed all of them - a real achievement for someone who left school with no qualifications, I can tell you!"

Happy with her well-honed computer skills but wanting a new challenge, Carol was soon ready to tackle something new.  Again through OFCA, she enrolled on and passed both Basic and Intermediate Food Hygiene awards.

"I'm so glad that I took those first steps and went to OFCA.  It's given me so much confidence and I'm learning something all the time."

After several years volunteering at the Association Carol wanted to get more involved.  She became a committee member and helped manage one of OFCA's training projects.  She started out mentoring at the Youth Drop-In service and later - after completing training in both child protection and first aid - became the group's secretary. 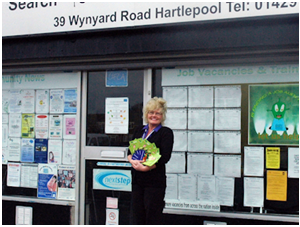 In May 2006, Carol was offered a part-time job at OFCA.  In her current role as a community outreach worker Carol has some involvement in most of the Association's projects and has never stopped learning.  She completed a Community Sports Leaders Award so that she could help out with the COOL club (Community Organised Outdoor Leisure) for young people aged 8-14 and has also tried a ‘bite-size' British Sign Language course.

Carol now plans activities for older people and people with disabilities and runs the Owton ward's Fruit and Veg Bag Scheme in partnership with Hartlepool Borough Council.  She also heads up VIP2, a gardening service for older or disabled people living in their own homes.

But what's next for Carol?  "I'd like to do a full British Sign Language course, so if any young people with hearing difficulties come along to COOL or the Youth Drop-In, we would have a leader who could communicate with them."

"Since being with OFCA my confidence has really grown.  I've learned so much and had so many great opportunities.  I never thought I'd get to do something like this."

To find out more about any of the projects mentioned in Carol's story, contact the Owton Fens Community Association on 01429 283187 or call in to the main office at 224-6 Catcote Road, Hartlepool.