Maria Wright has always been independent.  Originally from the Italian city of Venice, she worked for the armed forces as an interpreter during World War 2.  It was during the conflict that she met her husband, a Hartlepool man who was serving in the British Army.

Maria has lived in Hartlepool since 1946, when she and her husband settled here to start their family.  She had always kept active and was a keen gymnast right into her 60s.

Maria had never been in contact with social services until recently, when she realised she was struggling to hear the doorbell.  A telephone call to the social care Duty Team at Hartlepool Borough Council led to a home visit from Frank, a social worker specialising in hearing loss.

"I was so glad that I had spoken to someone," says Maria, who is now widowed and whose sons live in the south of England.  "I felt better knowing that social services knew about me, and that they were there to help if I needed them."

During Frank's visit he learned that Maria was having difficulty getting in and out of the bath, and that she was worried about getting stuck with no-one around to help.  As well as arranging for an amplified doorbell to be installed, Frank asked an occupational therapist to visit Maria and find out if there was anything that could help her bathe more safely.

"Everyone who came to see me was so nice.  They treated me with such compassion.  And respect!" Maria smiles.  "The therapist understood the problems I was having and tried different pieces of equipment until we found something that would help me.  I now have an electric bath lift and a warden call pendant, so I don't have to worry about using the bath anymore."

As the occupational therapist talked to Maria about how she was managing with other tasks around the house, Maria confided that she sometimes worried that her balance wasn't as good as it used to be.  Concerned that Maria may be at risk of falls in her home, the occupational therapist asked if she could refer Maria's case on to the Falls Prevention Team based at Hartfields retirement village in Hartlepool.

Justin Ditchburn was the first member of the team to visit Maria at home.  "I did what we call a multifactorial assessment," he says.  "We discussed the different things that could cause a person to fall, such as their footwear, eyesight, whether they have a history of falls and what medication they are taking.  Some of it is common sense: making sure that carpets aren't frayed and that power cables and leads are tucked out of the way."

Members of the Falls Prevention Team are equipped with tea towels and bookmarks to help spread their message.  "All of the things Justin told me have really helped me to look after myself, and the exercises Annette gave me to try meant that my balance improved." 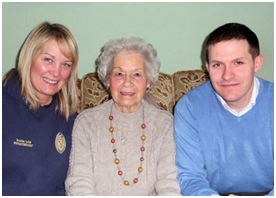 Annette Durkin, the team's physiotherapist, says: "We give people exercises to help them build their confidence.  Sometimes, people are afraid to go outside in case they fall, but this actually makes the problem worse: a lack of exercise means that muscles in the legs become weak, which increases the risk of having an accident."

Maria has a good relationship with Justin, Annette and Frank, and it shows.  While Maria was impressed by the staff's attitude and the ways they worked together, Annette insists that Maria was an ideal client: she worked hard at her strength and balance exercises and took note of the team's advice.

"My time with Annette and Justin has made me pay attention to what I'm doing!  I look after myself - I regularly have my blood pressure checked at the local pharmacy and, though I like to get outside, I stayed at home when it was very icy.  The winter fuel payments I receive mean I don't have to worry about keeping the fire on and staying nice and warm inside."

Maria turned 84 last month and enjoyed a birthday meal and afternoon out with her friends to celebrate.  She also wanted to give her ‘very warm thanks' to all of the people who have helped her along the way.

"I have always been treated so well, with kindness and understanding.  People really should not worry about asking for help if they need it.  Before I talked to social services, I would sometimes feel scared.  I am very grateful for all the help I received and now I feel happy and independent."